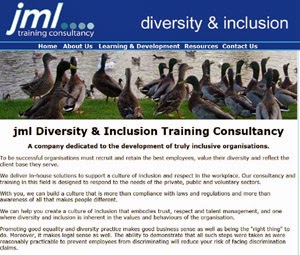 Following on from the launch of the re-designed jml Leadership Training Consultancy website earlier this month (See the jml training blog here) a brand new new specialist Diversity and Inclusion site has just been launched.
This brand new site covers Diversity and Inclusion training. A subject that is certainly not new to jml Training Consultancy.

The company has been offering  diversity and inclusion services since 1997 in the UK. 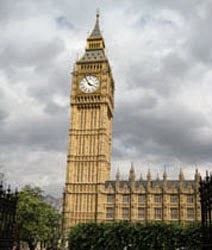 During that time in-house training courses have been produced for numerous clients including Housing Associations, Colleges and Universities, District and County Councils, National Government Departments, NHS Health Authorities and in the last couple of months HM Government Ministers, MPs, Members of the House of Lords and Members of the European Parliament.

The new jml Diversity and Inclusion website has been designed at the training company wants to encourage organisations to take a more holistic approach to diversity, to see beyond the differences and concentrate much more on the process of inclusivity. To this end it has revamped its website to make this process easier to navigate.

Most organisations will have diversity and inclusion  issues and jml Diversity and Inclusion Training Consultancy is well equipped for training in this area . This ensures that this subject stays as a key organisational priority and does not get squeezed by other demands and requirements to one side.

Posted by Philip Suter at 00:49 No comments: 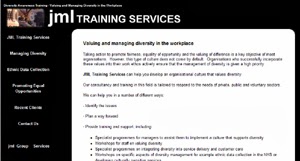 Back in 2004 jml Training Consultancy launched their first website.

This was based on a major part of jml Training Services output of Diversity and Equal Opportunities. The website was updated over the years to take into account the variety of in-house training products being offered by the company. 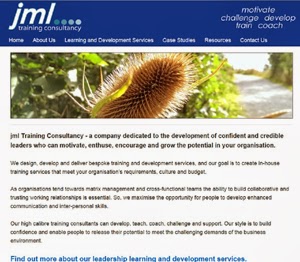 Today a brand new site has just been launched. This has been designed to make it even easier for clients to navigate and to arrange for their in-house training and development programmes for their employees.

To quote the press release that has gone out today -  "More importantly, jml Training Consultancy looked at the many business challenges organisations were facing. For example;

In response they have designed a range of leadership programmes, courses and other services – a one-stop shop – designed to help organisations integrate the most appropriate elements of learning and development to address these challenges" See Press Release Here.
jml Training Consultancy has been providing training services for over seventeen years now and is run by Grainne Suter who has more than twenty five years delivering training.
For more information about the training services offered by jml Training Consultancy visit the Learning and Development Services page here After all There has never been a better time to invest in your organisation's future than investing in training now

Posted by Philip Suter at 07:01 No comments:

Is there a momentum growing for greater gender equality in the workplace or do we need quotas?

I have always believed that quotas were an insult to women and that women should be accepted on boards and in senior positions because of the skills, knowledge and experience they had to offer.


However, Chris Blackhurst’s article in The Independent 29 January 2014 has made me reflect on this again. I found some of it very disconcerting.  He suggests that in places where men gather, for example bars, football grounds and golf clubs true feelings about gender equality are expressed. These voices are far from supportive of women in corporate directorships, in fact commitment is only skin deep and many actions are lip service. He argues that quotas are unavoidable if targets are to be met as progress to date has been so slow.


Christine Lagarde, head of the International Monetary Fund, has also come to this same conclusion.


“I grew up in a big international law firm that I love but the number of female partners was so low and had been so low for such a long time that I soon realised that unless we had at least targets, if not quotas, there was no way we were going to have numbers of females in the partnership” Now, says Ms Lagarde, she is, “pro-quotas, pro-targets.”


Francis O’Grady the new boss of the TUC has also advocated the need for quotas and the EU has approved proposals to make large companies fill 40% of their non-executive board posts with women.


But before we move further down this road surely more effort needs to be focused on better childcare tax breaks for women returning to work, casting the net wider for female talent and companies investing in mentoring and development to help the women in their organisations rise to the top.


The IoD has appointed a senior consultant in diversity, as they continue to focus on gender equality in boardrooms. Let us see more appointments like this building networks and bringing women together to promote female participation in senior positions.


Whilst on the subject of equality, the gender pay gap is at 19.7% or 9.6% excluding part-time work. Women are still waiting for pay parity with men even in high-performance work places where there is greater emphasis on team working and functional flexibility.


An inclusive leadership approach pro-actively adopting best practice on equal pay, building an executive talent pipeline, tackling the organisational obstacles and, most importantly, challenging the institutional mindsets in both public and private sector may help us avoid the introduction of quotas.


Let us all work within our sphere of influence to encourage those we know  with clout, to show leadership and take steps to break this monoculture. Do it not only because it makes good business sense but because it’s the right thing to do.
Grainne Suter February 2014


Looking for Diversity and Inclusion training for your organisation?


Visit the specialist jml Diversity Training website here or email us at enquiries@jml-training.com