jml Training Client in the News 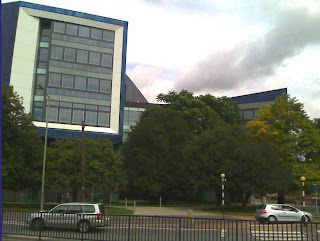 One of jml Training and Consultancy's clients was in the news last Thursday 11th March 2010. "The Independent's" Education section had an article entitled "Bucks New University goes into business with industry".

The article explained the transformation of the University from University College to one of the newest universities in the land. The article went on to say "Based in High Wycombe (pictured left), famous for being the home of Benjamin Disraeli, it has morphed in three years from a little-known university college to a place that is becoming popular with students and doing what the Business Secretary Lord Mandelson wants. Its expansion sums up what has happened to higher education in the past 20 years.

With 9,000 students and close links with employers, it has been reorganised by a vice-chancellor who has got rid of 160 staff,( Ruth Farwell) replaced her senior management team, consolidated the institution onto two campuses instead of three and erected a swish £30m building for students that bristles with music and video production studios. Unlike many other universities, Bucks is now in a pretty strong position. It is not expecting to make further cuts. "We're not complacent," says vice-chancellor Ruth Farwell. "We've been controlling vacancies carefully. As academics leave we will replace, unless we need to move resources from a less to a more popular area. I'm not saying there won't be changes in provision because there are all the time, but they won't be a result of the economic climate."

The Bucks story gives the lie to claims that the entire university sector is facing cuts. Institutions that have been thinking hard about how to organise themselves are doing all right. They have healthy balance sheets and are filling courses successfully. Farwell took a hard look at all programmes in 2006 and axed one – 3D design – that wasn't attracting students.

Bucks wasn't always flourishing. When Farwell arrived, it had had its application for university status rejected. She put that right. "In my judgement, there weren't things fundamentally wrong," she says. "But it needed to be clear about what kind of university it wanted to be."

She found that Bucks had been trying to ape traditional universities by hiring people who were good at research without too much thought for what the institution was strong at. "Their recruitment didn't underpin the curriculum," she says."

The Independent article can be found at: http://www.independent.co.uk/news/education/higher/bucks-new-university-goes-into-business-with-industry-1919170.html
Posted by Philip Suter at 00:41